Cascarones are confetti-filled eggs that are mostly thought of as a part of Carnival celebrations, though are increasingly a part of other special occasions such as Easter, New Year's and birthdays. I was thinking that they could be an easy and fun gift to give for Mother's Day. Find out more about the inspiration and history of cascarones underneath the directions for making them.

Making -
1.  Gently tap one end of the egg to create a small crack, then break away a small hole (try for less than 1" in diameter).
2.  Gently remove the egg whites and yolk.
3.  Wash the egg, then set it aside to dry.
4.  Find some colorful paper and spray it with a favorite perfume.
5.  Cut the paper into thin strips and then into small pieces.
6.  Decorate the outside of the eggs. I tried 3 different ways, though of course there are many other ways:
*  Use permanent markers to print a message and add designs.  Watercolor markers can be used to add areas of color, but they will smudge easily.
*  Cut small shapes out of art tissue. Then use a paintbrush to coat watered down glue under and over the tissue paper shapes.
*  Use the same watered down glue approach to decorate an egg with small soft plant material.
7.  After the eggs have dried, inside and outside, pinch bits of confetti inside each egg. It's best if you fill each egg at least 1/2-full.
8.  Glue art tissue over the hole to close it.
9.  Give the cascarones as a gift.
10. With permission, you or the person who received the cascarones gift can tap it gently while making a wish, the crush the egg over someone's head to sprinkle the perfumed confetti all over them. 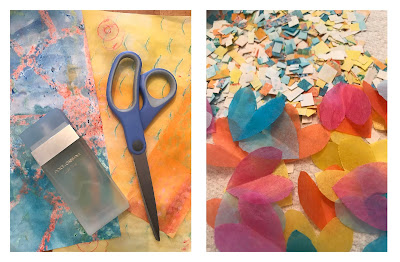 Inspiration - I first learned about cascarones in a book titled, Family Pictures /Cuadros de Familia by artist and author, Carmen Lomas Garza. In this book, and many others, she illustrates the everyday traditions of her Mexican-American family growing up in South Texas.

An example of how cultural traditions travel the world, it turns out that cascarones first appeared in China centuries ago. It is thought that the explorer, Marco Polo, brought them back to Italy, then Spain. The custom made it's way to Mexico, and has since become known in the Southwest of the U.S. Cascarones were originally filled with powdered perfume, though now in Mexico and the U.S. they are usually filled with confetti.  Cascarones are most commonly a part of Carnival celebrations in Mexico, but are increasingly a part of Easter and other annual festivities. 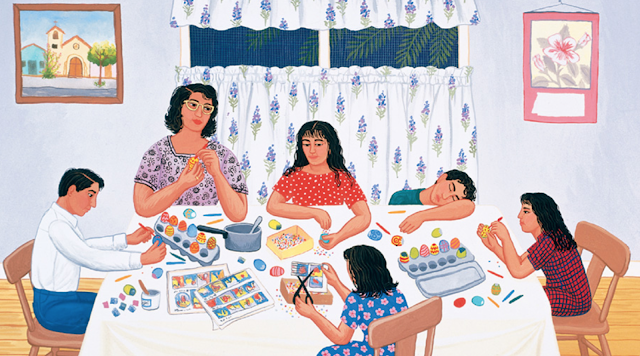